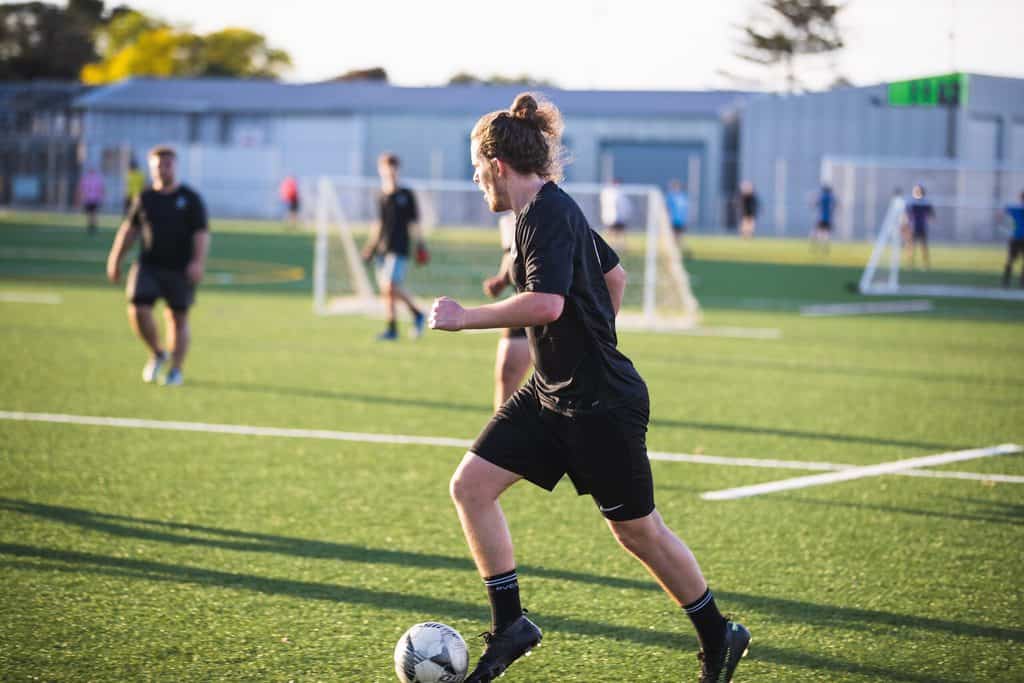 Here’s the one thing every soccer coach knows: the difference between a good team and a great one is how good the players are.

That’s why trainers invest so much time and resources into practice drills to help soccer professionals improve and reach the peak of their abilities. To get your team competing shoulder to shoulder against the very best in your league, you need to focus on training sessions that improve the vital aspects of their game, such as speed, strength, reaction, ball control, and decision making.

This blog post will focus on some of the drills you can incorporate into your routines on the training pitch to get your players performing at their best consistently.

For soccer coaches, one of the most invaluable skills an attacking player can have is the ability to weave his way through the opposition with silky footwork. Top soccer forwards know how to get themselves out of trouble with deft touches that leave the opponent trailing in their wake. These kinds of players can create moments of magic out of nothing in any game, especially against a team that prefers to sit still in their penalty area.

If you want to improve the dribbling techniques of your strikers and wingers, then the random dribble drill is a practice drill you should make part of your sessions. This exercise focuses on helping players get away from a sea of opposition players using a superb combination of quick feet and nifty footwork. It’s also efficient at improving ball control and concentration.

To set up this drill, arrange several cones across the training pitch at varying distances from each other. Generally, your players’ task is to dribble through all of the cones at their fastest pace while you take notes on their progress and instruct them on where to improve.

2. One Vs. Two Dribble Drill

We’ve seen it a lot during soccer games: a player comes up against one or two defenders blocking his path to the goal. He attempts to dribble his way through but fails, and the goalscoring chance slips away. The player hangs his head in embarrassment while his manager fumes on the touchline.

Scenarios like these are the small margins that decide a game, and you can do the hard work on the training pitch to ensure your players take advantage of them when they present themselves on matchdays. One routine that can help with this is the one vs. two dribble drill.

This practice routine effectively improves the confidence, finishing ability, speed, and vision of your players. To set up this exercise, use two pairs of cones to create two gates some meters away from the goal post. Two players – preferably defenders – should cover each gate to prevent an attacking player from finding the net. A goalkeeper should also man the goalpost.

The attacker’s goal is to dribble past the defenders and beat the goalkeeper to score a goal. Other forwards on your team can take their turn after the first striker has lost the ball to the defender or scored a goal.

The best soccer players in the world possess an excellent combination of speed and strength. The individuals on your squad need these qualities if your team will challenge for honors alongside the sides at the top end of the league table. Push-up start soccer conditioning drills can help you improve your players’ leg drive, lower body strength, and hip power.

For this exercise, you need two cones set 20 meters apart. Each player starts in a push-up position at cone one. Then, on your cue, they get up and race past the second cone. They should keep their bodies low throughout the sprint. For maximum results, every player on your squad should carry out six to eight reps of this drill.

This routine focuses on building leg power and muscular endurance. Generally, it involves running down a grassy hill inclined at about 30 degrees. Players should sprint at least ten yards, with long recovery periods between reps, as this drill can be demanding on the leg muscles. Alternatively, your team could also run up the hill to work on stamina, coordination, and leg movement. Again, sprints should be at least ten yards, with long rests between each rep.

The agility ladder is a piece of training equipment that effectively helps players improve their footwork, agility, and coordination. It’s pretty versatile, and soccer teams can use it to pull off several drills. For example, you and your players can use the agility ladder to carry out the Hopscotch ladder, ickey shuffle, in-in-out-out, one-footed hop, and the ickey shuffle crossover.

Soccer games are fast-paced, and players often have to switch from attack to defense situations in a split second. To deal with these scenarios, you need players who are quick on their feet and react quickly to switches in play. The reactive switch and backpedal drill is a practice routine that can help improve your players’ reaction, acceleration, and declaration.

To pull off this exercise, set two cones about 10 yards apart. Each player stands at cone one, and on your cue, they sprint towards cone two. Once you give a second signal, they decelerate and backpedal towards cone one.

Building a good soccer team requires tons of hard work and practice. Even the most talented squads in the world invest a lot of time and effort into training to pull off the fantastic performances we see on matchdays. While you may not have the most gifted individuals on your team, with patience, discipline, consistency, proper training routines, and a winning mentality, you can create a squad that challenges for top titles season after season.