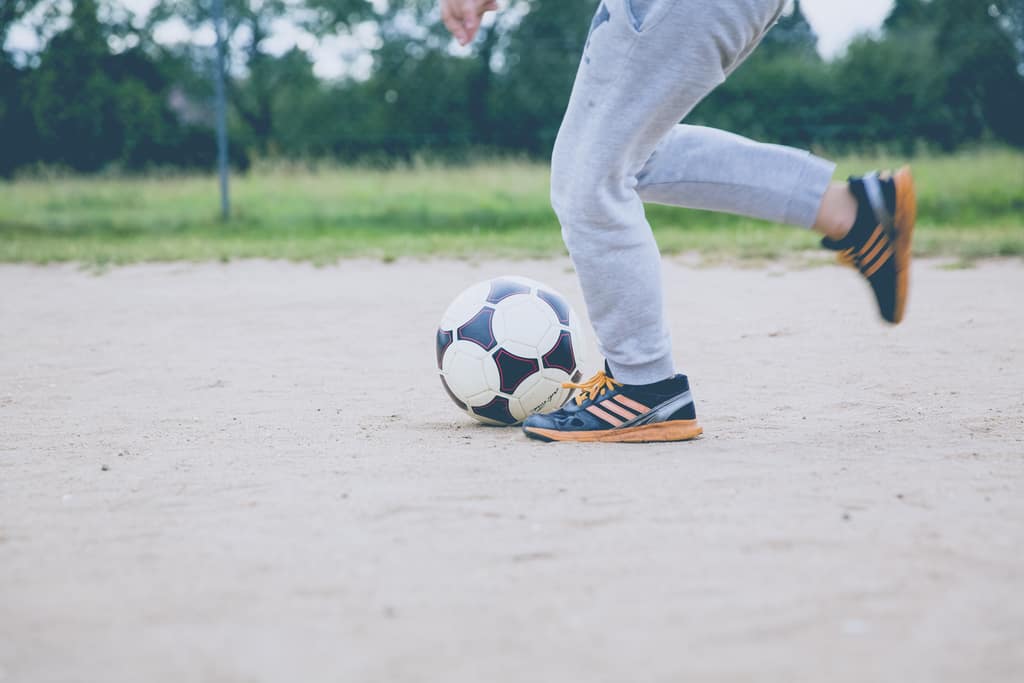 What is a weak foot?

A weak foot has nothing to do with injury. It does not mean that a player can’t play at all with a certain foot. It simply means that they play much better with one of their feet than the other.

Most people are either right handed or left handed, meaning that they instinctively gravitate towards using their dominant hand when completing every day tasks. Additionally, most soccer players are also right footed or left footed, meaning that they tend to use their dominant foot when they touch the ball or shoot. Some people are born ambidextrous (with the ability to use both hands or feet equally as well), but anyone can be trained to use both feet powerfully.

Why does it matter?

Soccer is a fast-paced game that is played at 360 degrees. There is no guarantee that the ball is always going to roll to the same side as a player’s dominant foot. It would be a disservice to the team if a player, regardless of position, was not constantly ready to act with whichever foot the moment calls for.

Vision is also a crucial part of the total package for a great soccer player. Players who heavily favor a particular foot tend to position their body towards that side, limiting their field of vision. A player cannot anticipate what he or she cannot see. A player who can use both feet, is likely to see more of the field of play, has a better ability to read the game and react accordingly.

A player’s ability to use their weaker foot adds an element of versatility to a player’s skillset. In tennis, most players are stronger on their forehanded than backhanded. The ability to make a decent backhanded shot allows a tennis player to win more volleys by catching their opponent off guard by switching to the weaker side.

Cristiano Ronaldo is a perfect soccer example of this concept. His right foot is more dominant; however, he scores from time to time with his weaker left foot. He dribbles proficiently with both feet, which makes him particularly dangerous as he approaches the goal. His left footed goals, which average to about 20% of the goals he scores are usually much weaker shots than his powerful right footed goals, which is to be expected. However, his left footed goals are often the result of a defender and goalkeeper over-guarding his right side, leaving a free kicking lane to Ronaldo’s left. His team greatly benefits from his ability to score with either foot.

The first thing a player should know about improving their weaker foot is that it’s going to be a difficult process. You are going to have to act in complete opposition of your natural tendencies. In essence, you are training your brain to think a different way. Think of it as trying to learn how to write with your non-dominant hand. In the beginning, it will be awkward, and you may not be proud of the initial results. Don’t allow the perception of failure to discourage you. This will be a long, slow, and difficult process, but the end results will be that you have a leg above most players on the field. Remember that practice makes perfect, and you are going to need a lot of practice.

Strengthening a weaker foot is essentially going back to square one. Start off with keepy-uppys on your non-dominant foot. To do a keepy-uppy, a player must make several small kicks of the ball to keep it up in the air. The kicks should be small, controlled, and quick paced. The goal is to be able to do them back to back to back quickly and without every letting the ball fall down. Acclaimed freestyler Billy Wingrove suggests that players who want to get better at keepy-uppys challenge themselves to do 200 consecutively without dropping the ball. Each time you drop the ball, start over. Keep on practicing until you can get to 200. By the time you accomplish this goal, you will have practiced controlling the ball with your weaker foot thousands of times. By that point, using your weaker foot will begin to feel more natural.

After mastering keepy-uppys, try to add motion to your practice. Create a slalom course for yourself. You can use cones such as those found here

, sticks, poles, rocks, or anything else that will give you a landmark. Start off with three landmarks and dribble in between them using your weaker foot. Space the landmarks out as far as you think is necessary. Initially, you should space them out a few yards. They shouldn’t be so close or so far away that the course is unusually difficult or easy to complete, but the length should be set according to the players ability.

When that feels comfortable, add another landmark. How can you tell if it’s truly comfortable? Mentally, you should feel like you know what you are doing. You should start developing a confidence. Physically, you should be able to complete the course fluidly without stopping, pausing, or kicking the ball away from the course.

Keep repeating the process until you have made yourself a slalom course of with ten landmarks. Make this a part of your training regimen. As you get more and more used to the course, change it up to make sure you stay engaged and keep learning. Add more landmarks to the course. Change the spacing of the landmarks to make it more difficult. Sometimes, give yourself a challenge of doing tricks around the landmarks, doing keepy-uppys in between the cones. Do anything that will keep you mentally and physically committed to the process. Make sure whatever you chose to do is appropriate for your skill level. Something that is unreasonably difficult will only sever as a discouragement.  Here is a video that can be used as a guide for your training:

Perhaps one of the greatest benefit of being comfortable on a weaker foot is being able to shock opponents during a game by shooting with your weaker foot. In crucial moments, towards the final minutes of a tie game, this ability can be the difference between winning or losing.

After gaining better control of your weak foot through keepy-uppys and putting that control to motion through a slalom course, it’s time to go back to a static skill. Practice shooting with your weaker foot.

At first, your attempts may be dismally off. You may feel like you are starting at square one all over again, and that’s ok. Shooting is an entirely different skill set than juggling or dribbling. Remember the progress you have already made and commit to practicing shots until you can score just as good with your non-dominant foot as you can juggle or dribble.

There are no magic tricks to shooting. Keep doing it over and over again until your shots become accurate and they feel natural. It’s best to practice shooting into a goal with a goalkeeper in the net who has the ability to stop your ball. That is a direct simulation of an in-game scenario, however any form of practice will help.

If you don’t have access to a goal or a goalkeeper, make a landmark for yourself. Your “goal” can be two trees, a rock, or a certain spot in a fence. If you want to get fancy, you can even attach a paper target to some stationary landmark to give yourself a visual cue, or you can buy targets such as those listed here on Amazon

that can be attached to goals.

DO NOT USE YOUR WEAK FOOT IN AN ACTUAL GAME UNTIL YOU KNOW THAT YOU ARE READY. However, feel free to use it in practice. The one skills that the drills discussed above don’t address is passing. There are plenty of drills around the internet to help you practice passing, but the best way to learn the skill is through actual practice. If scrimmages are part of the way your team practices set goals for yourself of making one accurate pass with your weak foot per practice session. Each session, keep adding to your goal. Eventually, you will be able to pass accurately with either foot.

If trying this out in practice doesn’t work for your situation, get a friend or teammate to pass to you, and practice a clean first touch as well as passing back accurately. The practice session will only be as good as the passing ability of your partner. Make sure you choose some that can pass accurately themselves. This should be a person whose passes you can catch with your dominant foot in normal circumstances.

6) Learn From The Pros

One of the best way to improve any soccer skill is to analyze the way professionals do it. Click here for insight on improving a weak foot straight from Arsenal legend Santi Carzola.

As mentioned before, Cristiano Ronaldo uses both feet. He scores about 80%, or the overwhelmingly majority, of his goals with his dominant right foot, but approximately 20% of his goals are still scored with his weaker foot. Ronaldo is a perfect example of being discerning about when to use the weaker foot. As can be seen from his ability to dribble with his weaker foot, he could easily use his left foot more often without being absolutely terrible, but he does not sacrifice quality for style. Even Ronaldo recognizes that he’s better off using his dominant foot, so he only uses his weak foot when presented a clear shot on goal or to surprise opponents by switching it up in moments of necessity. Nevertheless, he remains ready for the challenge.

What is the Goal of Strengthening Your Weaker Foot?

A player who is confident with both feet and knows when it’s appropriate to use a weaker foot has a unique talent. Keep practicing! Never give up!

1 thought on “6 Steps to Improve Your Weak Foot”