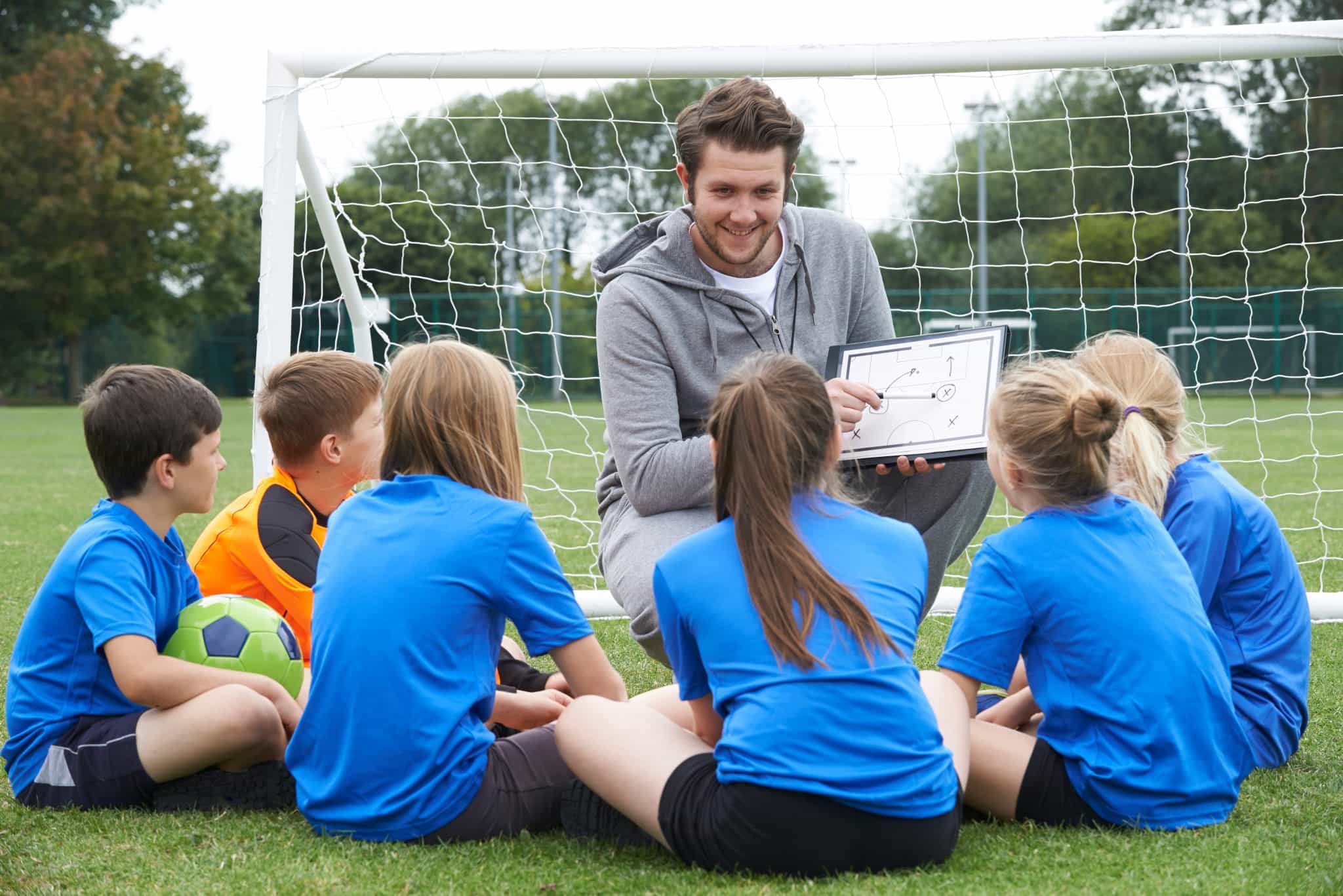 Do you want to read a long book on the rules of soccer?

I didn’t think so. That’s why we’ve created this article.

It covers the most important soccer rules so you can spend less time reading and more time playing.

The Basic Rules of Soccer

The Objective of Soccer

The objective of soccer is to score more goals than the other team.

The team with more goals wins the game.

To score, the ball most pass completely over the goal-line.

The game is played on a soccer pitch that varies in size.  An 11 versus 11 game is usually a little over 100 yards.

Captains are either elected by teammates or chosen by the team’s coach.

Captains must wear an arm-band with the word “captain.”

A captain must be in the game at all times (in professional soccer). If the captain is subbed out he must give his armband to another player.

Rules of Soccer: How to Start a Soccer Game

To start a game, each team’s captain meets with the referee.

The referee flips a coin and one captain calls “heads” or “tails.”

The winner of the coin flip can choose which goal his team will defend (teams will switch sides at halftime) or whether his team will kick off in the first or second half.

The ball is placed in the middle of the line separating the pitch into an offensive and defensive half.

Players must stay on their half. Crossing the line that separates the pitch is illegal until the ball is passed.

The player who “kicks off” must pass the ball forward across the line that separates the pitch.

The game starts after the kickoff.

Length of a Soccer Game

There are two 45 minute halfs. There is a break between halfs.

If the score is tied, the game may go into overtime. Overtime consists of two 15 minutes halfs.

The clock never stops. However, there are times when play is stopped (most commonly during injuries).

The unused time is recorded and added on at the end of a game. It’s called injury or stoppage time.

A penalty kick (or PK) occurs when an attacking player is fouled in the defending team’s box.

The ball is placed on the penalty kick spot (a dot inside the goalie box).

The offensive team selects a kicker. Other players must stand outside the box until the ball is kicked.

Play is resumed after the ball is kicked. For example, if the ball hits the post or the goalie blocks it, any player can shoot the ball into the goal.

A penalty shoot-out occurs when a game is tied after extra time.

The 22 players that are on the field can participate (however, this rule is often ignored in nonprofessional games; in other words, players on the bench can usually kick a penalty kick).

In a penalty shootout one player performs a penalty kick against the opposition’s goalie.

The kicker is changed everytime. Players cannot take more than one penalty kick in a penalty shootout. Unlike regular penalty kicks, other players cannot follow up if the ball is saved or it hits the post.

Teams take turns. Each team has 5 penalty kicks. The team that scores the most wins.

If it becomes impossible for one team to win (for instance, one team scores 3 penalty kicks while the other scores 0) the other team wins.

If the score is tied after 5 penalty kick “sudden death” begins. The first team to go up a point (after both teams have gotten a chance to shot a PK) wins.

How Many Players On the Soccer Pitch?

Each team has 10 field players and one goalie on the pitch.

Substituting means switching out a player on the field with a teammate who isn’t playing.

Players “on the bench” can be substituted in during breaks in play (such as a throw-in or after a goal).

In professional play, three substitutions are allowed (and the players cannot return to the pitch). However, most nonpro leagues disregard those rules.

The goalie can use his hands in the box.

He can dive at the ball (even if another player is close).

Each team has one goalie. Each goalie must wear a jersey with different colors than both teams.

Referees control the game. They can stop the game and call for a free kick if a foul occurs.

They blow their whistle when time is up or to indicate that a player can take a free kick.

There is one middle referee (the one that is actually on the field) and two side referees (often call offsides and determine who can throw the ball in).

The middle referee’s decision is final.

The middle referee can issue cards.  A yellow card is issued for dirty tackles. It’s a warning not to do another dirty tackle.

Players that receive two yellow cards get kicked out of the game. Their team has to play with 10 players.

Yellow cards accumulate in some tournaments and leagues. Players who receive too many yellow cards are banned from upcoming game(s).

A red card is issued for serious tackles (such as tackling a player from behind). It is also issued if a player fouls a player in an easy goalscoring opportunity (such as a breakaway) or purposely blocks the ball with his hands.

Players who receive a red card are banned from the game. Their team must play with 10 players.

Players who accumulate enough red cards over a season or tournament may be suspended for multiple games.

What Parts of The Body Can Be Used in Soccer?

Field players can use every part of their body except their hands, elbows, and arms.

If an offensive player is past the last opposing player (not including the goalie) before the ball is kicked he is offsides.

Players can’t be offside on their own half.

When the ball goes outside the sideline on either side of the field, a player must throw the ball back into play.

The throw-in is awarded to the team that didn’t touch the ball last.

The thrower must keep both feet on the ground. He should use two hands, lift the ball behind his head, and throw the ball over his head.

A corner or goalkick occurs when the ball goes outside the goaline.

If the team defending the goal kicks the ball out the opposing team gets a corner. The ball is placed in the small area at the corner of the field (marked by a flag) and can be kicked into play.

If the team attacking the goal kicks the ball out the defending team receive a goal kick. The ball is placed anywhere on the line of the small goalkeeper box.

Read more about the basics of soccer from The Complete Soccer Guide: