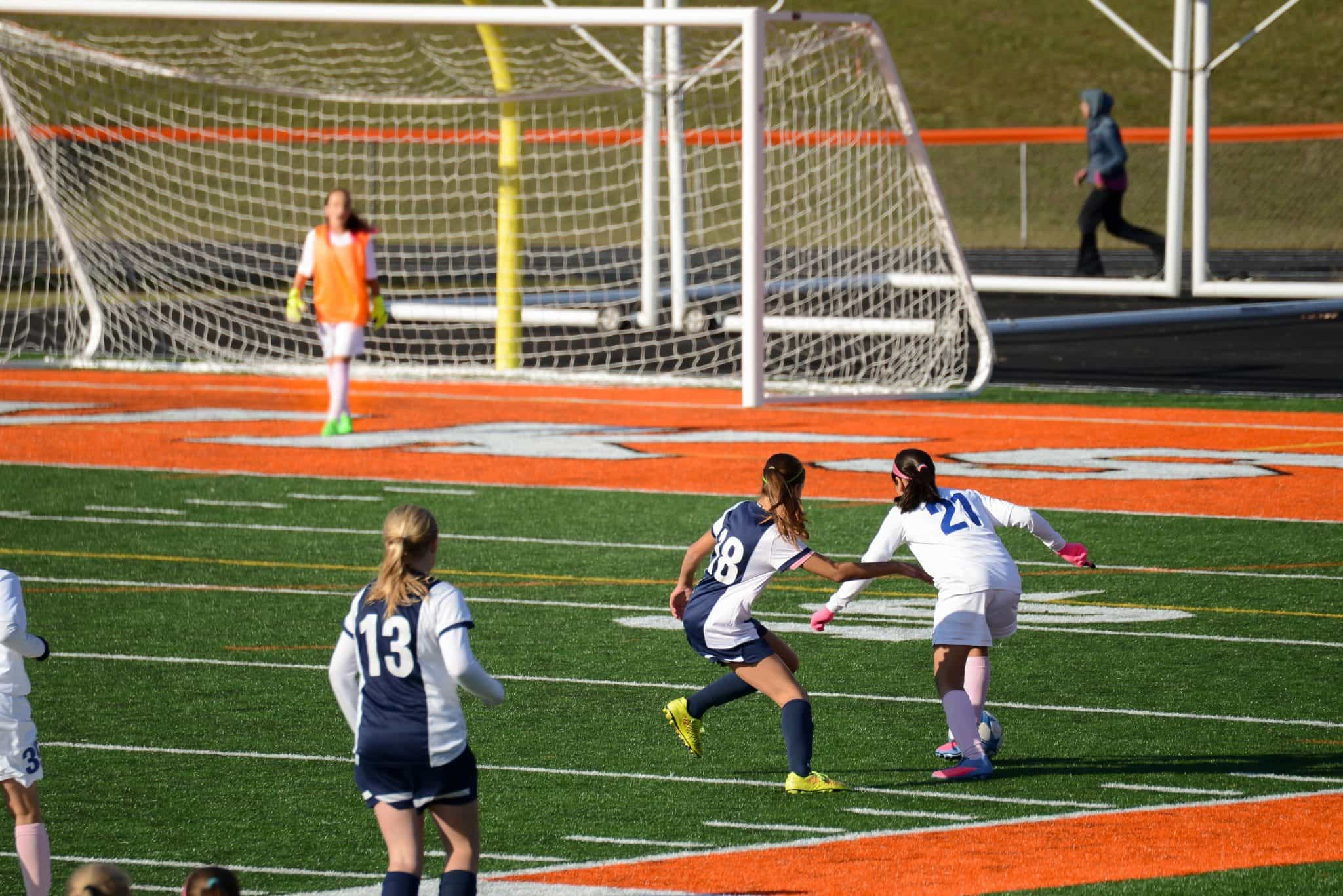 Defenders are the backbone of a team, possessing the grit needed to do whatever it takes to prevent the other team from scoring.

They usually hang back, protecting the goalie from breakaways and serving as options for midfielders in the defensive half.

Defenders have a hard, often unappreciated job. They need mental toughness, and determination to succeed.

This article will cover the top traits of a good defender and provide some tips to help you succeed at the position.

5 Traits of a Good Soccer Defender

These are the top 5 traits that good defenders possess (in order of importance):

Good defenders know how to defend well (who would have guessed?).

You should be an expert at tackling (without fouling) sticking with your man off the ball, double teaming, delaying, winning headers, defending tactics, etc.

Read our article, How to Defend in Soccer, to improve your skill.

Forwards and midfielders are often fast. You need speed to keep up.

Centerbacks with good positioning and strength can be effective with mediocre speed, but being fast will greatly improve their ability to defend.

Wingbacks need speed or they will get dominated by a fast winger.

Develop strength by lifting weights and eating right. Read our article on How to Shield a Soccer Ball to develop this skill.

Defenders should head the ball far and wide to remove the ball from the defensive half.

Read our article, How To Head a Soccer Ball, to learn good heading technique

Defenders without the ability to pass effectively reduce a team’s possession percentage.

Clearing the ball has it’s place. But defenders should look up and pass the ball when they have time and space.

Good defenders can pass to feet and make effective long passes through the air.

Read our article, How to Pass a Soccer Ball, to improve your passing ability.

Good defenders are aggressive. They aren’t afraid to make strong tackles and use their body. They attack balls with their heads and get in front of shots.

Play so aggressive that players are scared to receive the ball. You want the opposition to fear you.

The best defenders are aggressive and fearless but don’t lose their temper. A rash or impatient tackle can cost your team the game.

2. Don’t let the other team shoot

A defenders main goal is to prevent the opposition from shooting.

Do whatever it takes to prevent players from setting up a shot.

Opposing players that manage to shoot should have to rush it. He should be off-balance due and shouldn’t have enough time to get a clear view of the goal.

Defenders are useless alone. They need to work with other defenders and midfielders to be effective.

Defenders should coordinate to mark players, double team, and execute an offside trap.

When a defender is beaten, someone else needs to cover for him. Defenders should tell midfielders and other defenders who to mark.

Read our articles How To Develop Chemistry With Soccer Teammates and How to Communicate Effectively in Soccer for more information.

A good clear allows your team to regroup and avoid an unnecessary goal.

Players that feel comfortable dribbling can create holes in your team’s defense.

Don’t let this happen. Set the tempo early by refusing to let a player beat you. If they do, sprint as hard as you can to catch up and use your body to steal the ball or stop their dribble.

Prepare for the possibility of a defender or midfielder on your team getting beat. Be ready to pounce on the player if your teammate gets beat.

A few deadly dribblers on the opposition can make a huge difference.

Don’t let them beat you. They will become confident and beat players over and over.

Recognize these players and delay them (delaying is covered in our article on defending), even when a tackle looks easy. Good dribblers can evade your tackle and get past you before you know what hit you.

You need to force them to pass or they will destroy your defense. Show them that dribbling isn’t an option.

Wingback can move up the field to cross the ball. A good winger will cover you (play as a wingback) when you make a run upfield. If necessary, tell him to “cover me.”

Try overlapping or running down the sideline when your winger has the ball. The opposing winger may try to pressure your team’s winger or will get confused and stand still for a few seconds.

You will be open as long as the winger doesn’t turn and follow you quickly and the opposing wingback doesn’t react quickly to your run.