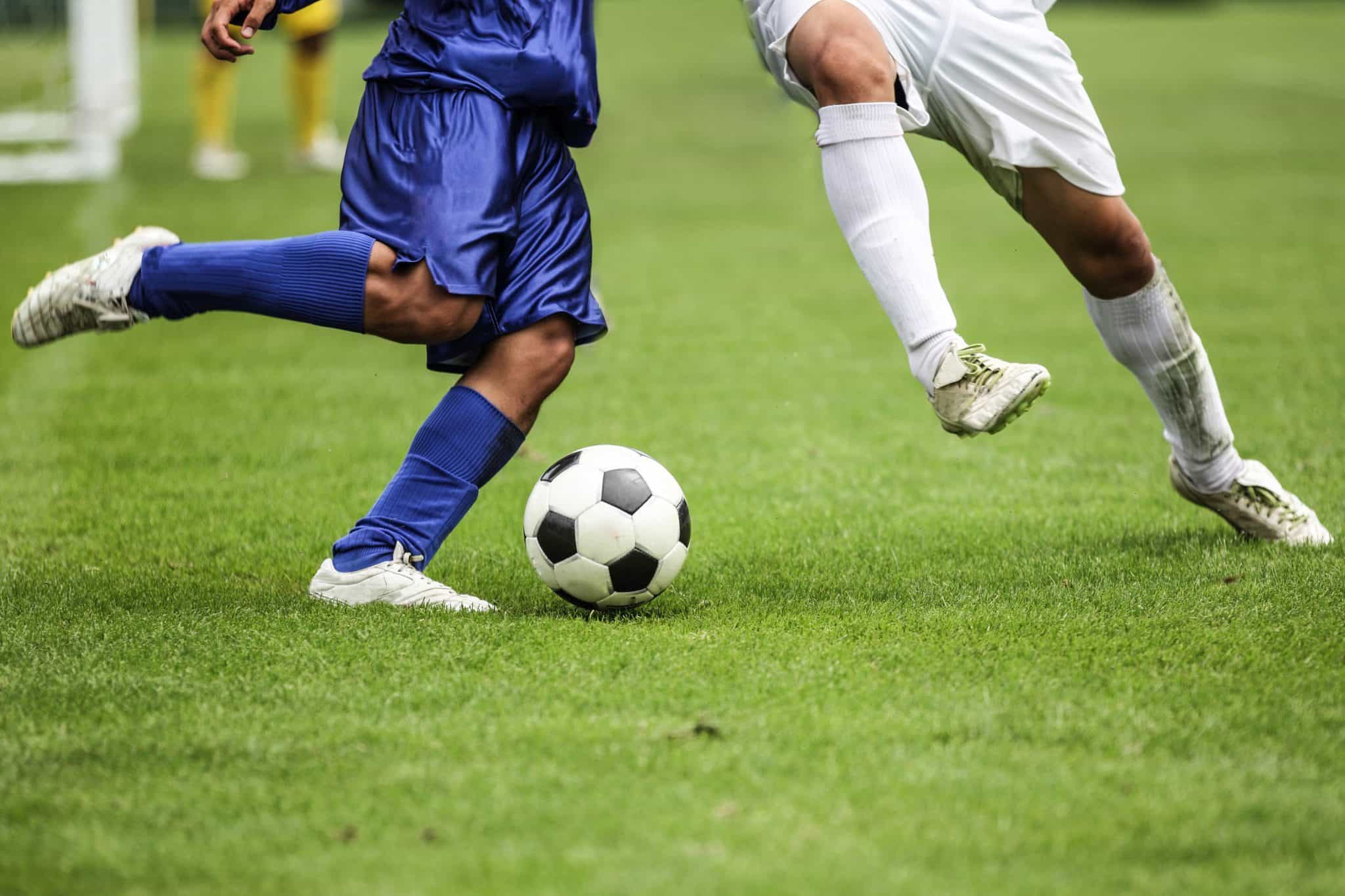 Every position defends in games, yet most coaches don’t teach players how to defender properly.

Coaches often say things like “don’t stab” or “get goalside” during games but these phrases are hardly a substitute for teaching players to defend.

It’s not surprising that almost all beginners and some advanced players don’t know how to defend properly.

This guide will teach you how to approach an attacker, the defensive stance, how to tackle properly, and tips on how to defend effectively.

1.  Move quickly to the player with the ball

Sprint towards the player with the ball.

The faster you put pressure on the attacker, the faster he will have to make a decision.

High pressure often forces offensive mistakes. Offensive players have less time to look up and find a good pass and won’t be able to dribble as far up the field.

Novice defenders apply high pressure but are easy to beat. They rush to the ball so its easy for good players to cut away from them.

Make yourself harder to beat by slowing down a few feet from the player with the ball. Act like you’re sprinting hard towards a player but quickly slow you approach by taking small steps and decreasing your speed.

Determining the ideal time to slow down takes practice. When learning this skill you will slow down too close to the player with the ball (which allows the offensive player to beat you easily) or too far away (which doesn’t put adequate pressure on the attacker). As you practice defending at the correct distance will become a habit that you will do without thinking.

You want to make dribbling as hard as possible.

When you defend at a slight angle (with your body turned slightly to the side) you make it harder for the attacking player to move in both directions.

You can force him in the direction you want him to go and/or make him use his weak foot.

For example, you defend at a right angle, forcing the attacker to your left. The sideline is on your left so now the attacker doesn’t have much space to work with if he chooses to dribble.

1.  Lower your center of gravity

Bend your knees lower your butt slightly. When you stay in this position you will move easier and have good balance.

Put your arms out naturally to improve your balance.

Use your arms to brush the attacker’s arms away when they try to dribble past you.

Getting the defensive approach and stance right is essential. Master both and you won’t need to tackle as often since the attacker will pass the ball quickly. As a result, you won’t get beat as often.

Tackling isn’t an exact science. How and when you tackle depends on the situation.

When you play against good dribblers you have to tackle at the slightest mistake or hesitation. Always tackle when the attacker is off-balance. Otherwise, continue delaying the player. You will get beat most of the time when you tackle good players recklessly.

When a player turns his back to you always apply intense pressure. Defend both sides of the player. If you put too much pressure on one side, he can turn to the other side and beat you.

Tackling a player is similar to passing a soccer ball. Move your leg to the side to build momentum then move it forward in a passing motion.

Do not use your toe to poke the ball unless you’re sure you’ll win the tackle. Poking the ball is quicker than using proper tackling technique, but you will get beat badly if the attacker touches the ball away from you. Recovering from a missed toe tackle takes a long time and attackers can dodge the tackle easily. For these reasons, use the technique explained in the previous paragraph most of the time.

Fake a tackle occasionally. Act like you will tackle then pull back halfway through the tackle. Fake tackles put the attacker off balance and force mistakes.

When you decide to tackle, commit fully. Do not go in with any hesitation as this gives the attacker more time to cut the ball away. Tackle hard.

If the attacker moves to the side or turns, use your body to defend ruthlessly. Good defenders create fear in attackers by putting unrelenting pressure on them the second they make a move.

Tackling takes timing and balance. Learning to tackle effectively takes a lot of practice. You will learn what works best in different situations as you become more experienced.

Off the Ball Defending

Off the ball defending comes down to good things:

Where you should position yourself depends on the soccer position you’re playing and the situation. In general, you’re in a good defensive position when you are in a valuable space on the field.

This sounds confusing, but it quickly becomes second nature when you play games at your preferred position.

Staying with your man is simple but isn’t easy. You have your man covered if you are close enough to intercept a pass or apply intense pressure when he receives a pass, and are far enough away to stick with him when he makes a run forward. Always stay closer to your goal than your man. This is called staying goalside (read our article How to Communicate Effectively in Soccer to learn soccer terms).

Keep an eye on your man as much as possible (touch him with your arm if he’s close to you). You only need to let your guard down for a second to get beat.

1. Use the Offside Trap

The offside trap can be extremely effective against teams that play through balls to a fast forward.

To perform an offside trap, one player (usually the center back) signals and every defender moves forward. Signal for an offside trap a few seconds before the ball is passed.

Even if you don’t use an offside trap regularly, you should still be aware of offside. One defensive player should never be far behind other teammates. Hold a strong line to prevent forwards and wingers from getting behind the line easily while avoiding getting called for offsides.

2. Call for a double team

A double team is effective when used correctly.

Call for a double team when the attacker is in a tight spot, like near the sideline, or doesn’t have good support (for instance, a single forward going down the middle without supporting runs).

3. Tell teammates who to mark

If you notice an unmarked opposing player, immediately tell a teammate to mark him.

Sometimes teammates get preoccupied with the ball and leave players open. Prevent an easy goal by keeping on the lookout for open players and informing your teammates.

Defenders often focus too much on tackling. Delaying an attacker effectively can be just as effective.

When you delay an attacker, your teammates have time to get back and mark their man. As a result, the attacker usually has little options and will make a bad pass.

Head the ball far and wide when you are in the defensive half. Read our article, How to Head a Soccer Ball to learn more.

Never tackle with the intent to injure. Having said that, do not be afraid to get called for a foul.

When you worry about fouling, you defend less aggressive.

Fouls will happen. They often don’t cause harm to your team. You will be much more effective playing aggressive and getting called for fouls occasionally than playing timid and avoiding fouls.

7. Keep your anger and frustration under control

I’m still amazed at how often advanced players commit pointless fouls (often resulting in yellow and red cards) simply because they lose control of their emotions.

Soccer can be frustrating. You will get angry. You can let your anger and frustration get the better of you and hurt your team, or you can use it as motivation to play better.

Tell yourself “I will not let my anger control me. I will use it as motivation to succeed.”

Control your anger and frustration and you will defend better.

10 thoughts on “How to Defend in Soccer”