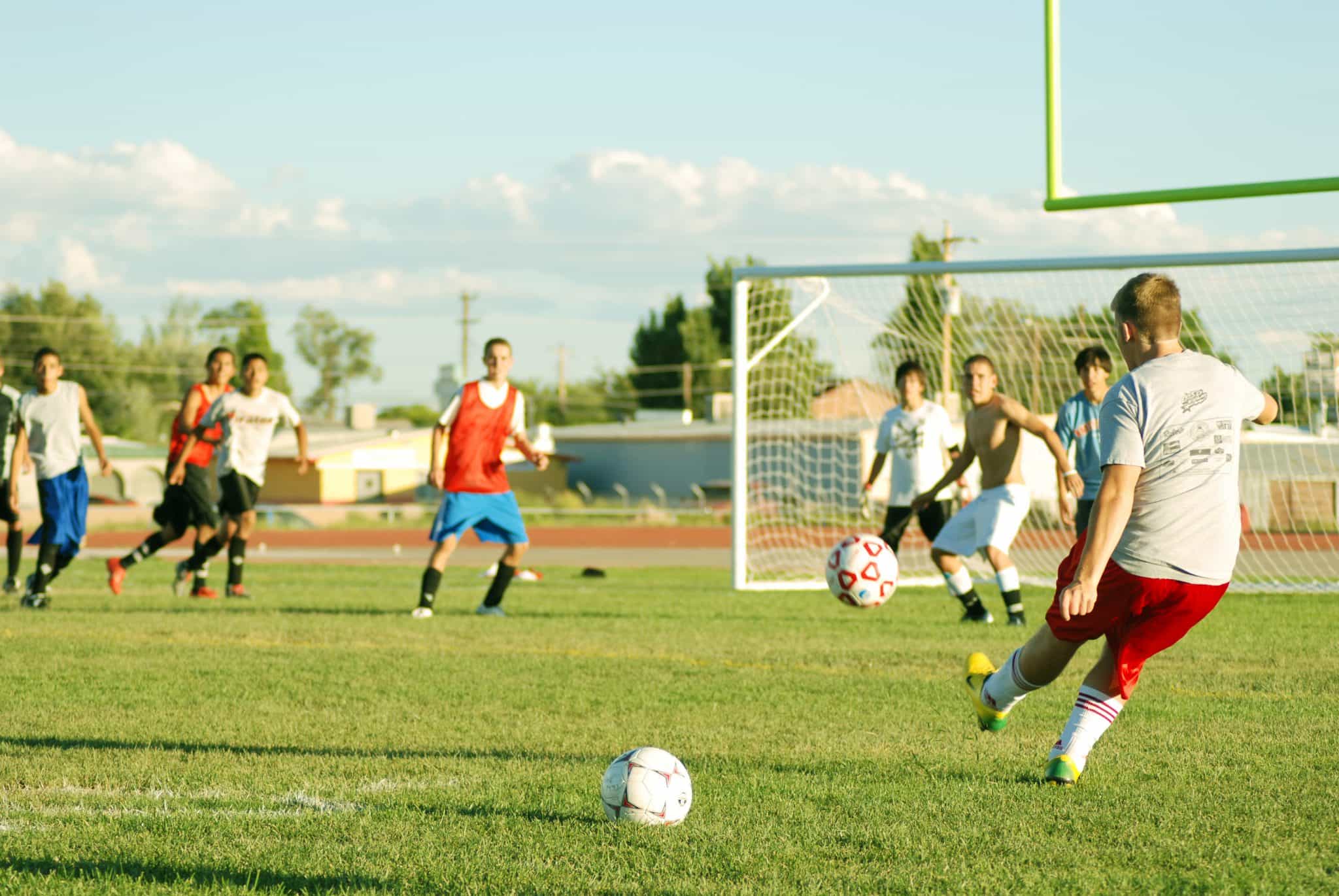 Why should you get good at free kicks?

So you can score more goals and increase your value as a player.

This article will teach you the 4 steps to perform before taking a free kick, how to get the ball past the wall, and tips on improving your free kick ability.

Note: Read How to Kick a Soccer Ball to Learn proper technique before proceeding.

5 Steps To Perform Before Kicking a Free Kick

You don’t have to place the ball exactly where the referee points; just place it in the general area.

Set the ball down on a good part of the field (if possible). Avoid uneven areas or patches of dirt.

For instance, you may think the wall will jump so you determine that you’ll kick the ball at the wall on the ground.

I sometimes see players take many steps back. This is pointless. The extra time only helps the goalie predict your shot.

Take two or three steps back.

Take a deep breathe to calm yourself. Relax your muscles. Tensing up will impair your technique.

Before you kick the ball, glance one more time at the position of the goalie, wall, and your teammate’s position (if you’re looking to cross).

How to Get the Ball Past the Wall

The wall is your first obstacle. Your free kicks will be unsuccessful if you don’t get the ball past the wall.

So how do you kick the ball past the wall? There are three ways:

The most obvious and common route is to kick the ball above the wall.

To accomplish this, follow through with your leg high in the air. If you keep hitting the wall, put your placefoot wider. It will help you get more loft on the ball.

When you want to switch thing up, kick the ball on the ground.

The ball will go under the wall of players if they jump. If successful, you won’t have to worry about kicking the ball over the goal and the goalie’s view will get impaired by the wall.

Try a ground free kick when you saw the wall jump on a previous free kick. This greatly increases the chances of the wall not jumping.

When you pull a ground free kick off successfully the wall will usually stop jumping. So kick the ball in the air after doing a successful ground free kick. The wall probably won’t jump so kicking the ball over it becomes easier.

Bending the ball around the wall is often the best option (depending on the free kick’s position). You don’t have to worry about kicking the ball over the goal or over the wall.

However, it’s the hardest of the three ways to kick the ball past the wall. It takes a longer time to master bending technique but it’s worthwhile if you’re serious about free kicks.

There are two things you need to avoid when bending a free kick:

1. Kicking the ball with little power

I’ve seen many players who know how to bend a free kick, but they kick the ball weak so it’s ineffective.

You don’t need to kick the ball weak to bend a free kick. With proper technique you can kick the ball almost as hard as a regular shot.

Bending too much or too little

Experiment with your technique. Try kicking free kicks from multiple angles and distances. Try kicking with different parts of your foot, following through at slightly different angles, and kicking closer or farther away from the middle of the ball.

All of these factors determine how much or how little the ball bends. How much bend you need depends on the location of the free kick.

Bending a free kick effectively takes countless hours of practice. However, your work will pay off. You will become the team’s go-to player for taking free kicks, giving you more chances to score goals and increasing your overall value in the eyes of scouts.

If your team doesn’t have a designated free kick taker, be firm about taking a free kick.

Tell your teammates “I’ll take it” and get in position immediately after the foul.

Be confident in your free kick ability before you follow this tip. If you repeatedly mess up your teammates won’t let you take free kicks.

2. Talk to your coach about kicking free kicks

Once you’ve practiced and become fairly competent, tell your coach that you want to kick all of the free kicks for the team.

Emphasize that you’ve been practicing free kicks consistently and know that you will be effective.

When you become the designated free kicker the coach will let you kick whenever the team practices free kicks. As a result, you will improve quicker and become more comfortable taking free kicks.

Players with mediocre technique sometimes try to chip the ball over the wall and into the goal. They don’t know how to kick the ball past the wall with power.

Chipping won’t work against good goalies; they will block your kick easily.

Learn and practice good technique so you can kick the ball hard and get it over the wall.

Learning to cross free kicks effectively is fairly easy and is good to have in your arsenal.

Cross the ball when free kicks are located at poor angles for shooting or are too far away from the goal.

If you have teammates that makes good runs, are tall, and can head the ball effectively, sometimes it’s better to cross even when you’re within shooting range.

Read our article, How to Cross a Soccer Ball to learn proper technique.