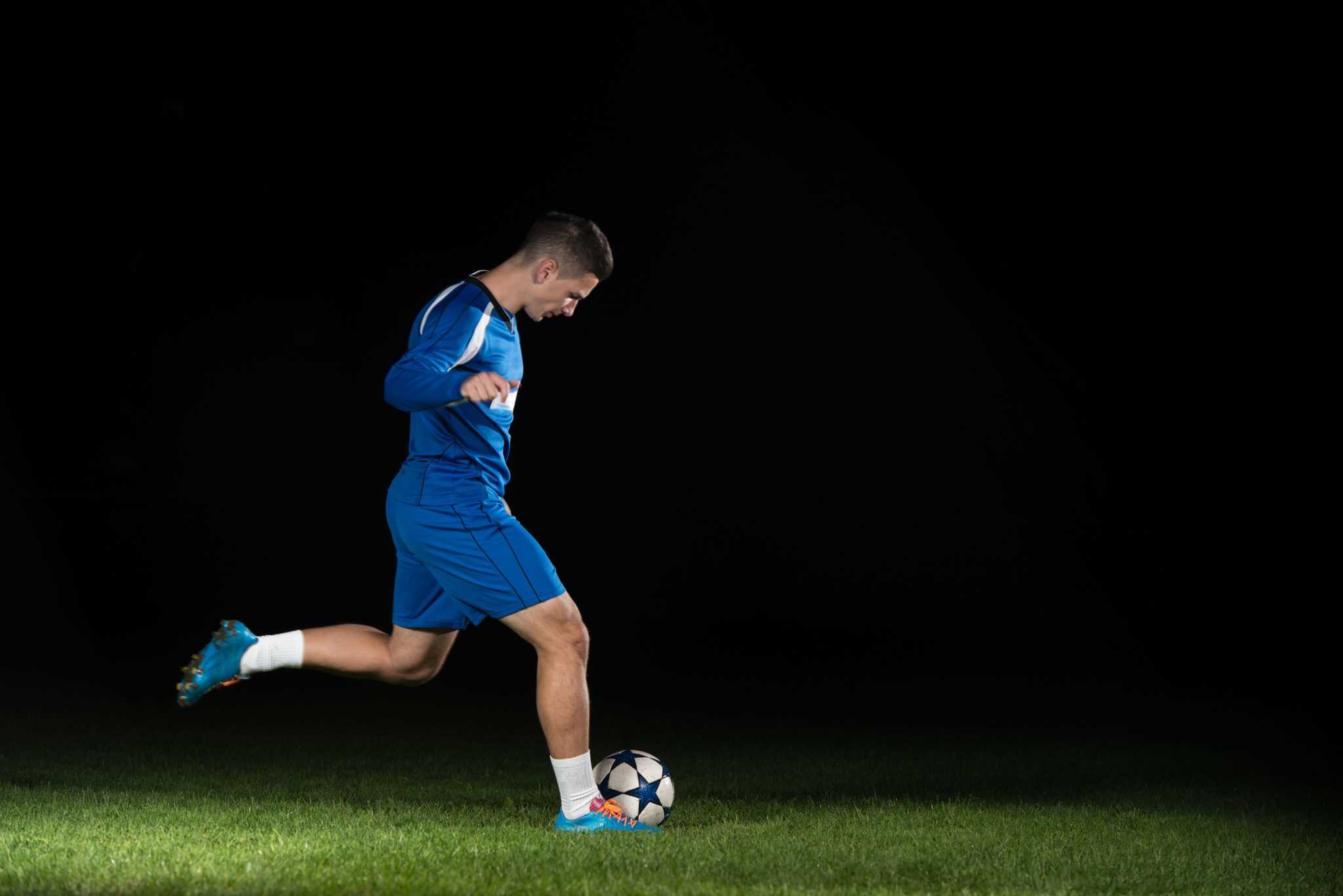 If you’re like most players, you rely on one type of soccer shot – the standard shot.

This limits your effectiveness because different types of soccer shots are more effective in some situations.

This article will teach you how to do the 7 types of soccer shots and when you should use them.

Note: Read How to Kick a Soccer Ball before this article.

You will use the standard shot more than other types of shots. It’s the most effective shot in most situations.

It’s superior to the straight shot (covered below). I know this because of American football kickers. Years ago kickers used a straight shot to kick a field goal. In the modern age all kickers use a standard shot because it improves accuracy and power.

To perform a standard shot, come at the ball at a slight angle and kick the ball with the area around the knuckle of your big toe.

Why would you use a straight shot when the standard shot is superior?

There are times in games when coming at the ball from an angle is impossible or would delay your shot. Use the straight shot in these situations.

For example, say that you’re dribbling and there are defenders around you. The defenders will block your shot if you take a touch to the side and shoot. If you use a straight shot, you can shoot quickly before defenders react.

The straight shot is also easier to keep low since it’s hard to follow through with your kicking leg high in the air (a high follow through and/or kicking the bottom of the ball will sent the ball through the air).

Shooting the ball low is often more effective than high in the air (read our article, How to Shoot a Soccer Ball to learn why).

Use the straight kick when you take a one-touch shot to keep the ball from flying over the goal (which happens frequently when players use a standard shot).

To do a straight kick, come at the ball straight then kick it with the the laces of your foot. Lock your ankle.

As you learned in our article How to Pass a Soccer Ball, the inside of the foot is the best way to pass a soccer ball with accuracy.

So use an inside shot when you need excellent accuracy. When you use this shot depends on how powerful you can kick the ball. If your shot is powerful enough, you may want to use it whenever you’re near the box. If your inside kick is too weak, use it when you are a short distance away from the goal.

To perform an inside shot, move your hip outside and back then kick the ball with the middle of the inside of your foot.

I believe the chip shot is overused. I see it used on 1 vs 1 with the keeper when it would be easier to use an inside shot to kick the ball past the goalkeeper.

Having said that, the chip shot has it’s uses. Use it when the keeper has roamed too far from the goalline and when you have 1 vs 1 opportunity with the goalkeeper at an angle (in other words, when the goalkeeper charges at you and your angle or position on the field makes it difficult to kick the ball past the goalie).

Use a bending shot to kick the ball around defenders, score from tough angles, or surprise a goalie.

Use any of part of your foot to do a bending shot. Using the inside or outside of your foot produces the most bend.

The outside shot is effective when you have to shoot the ball across the goal at a tight angle.

To do an outside shot, slice the ball with the outside of your foot.

The toe shot can be surprisingly effective. It doesn’t provide as much power or accuracy as other shots, but you can shoot the ball quickly.

For instance, defenders are closing in and the ball is a few feet away. You don’t have time to use a straight shot but you can stick your leg out and kick it with your toe.

I’ve scored a decent amount of goals with the toe shot. It’s far from ideal but can be effective in high pressure situations.

To do a toe shot, stick your leg forwards and kick the ball with your toe. Don’t move your leg back to build momentum like you would when performing every other type of soccer shot.

Focus on perfecting your standard shot since you will use it most. Spend the rest of your training time practicing your straight and inside shot.

When you are good at standard, straight, and inside shots, spend a little training time practicing chip, bending, and outside, shots. Don’t practice toe shots.

Follow this advice and you will spend most of your time practicing shots you use most in games.

Don’t give into the temptation to spent a lot of time practicing chip, bending, and outside shots. These are fun to do but aren’t used very much in game situations compared to other types of shots.

1 thought on “7 Types of Soccer Shots”