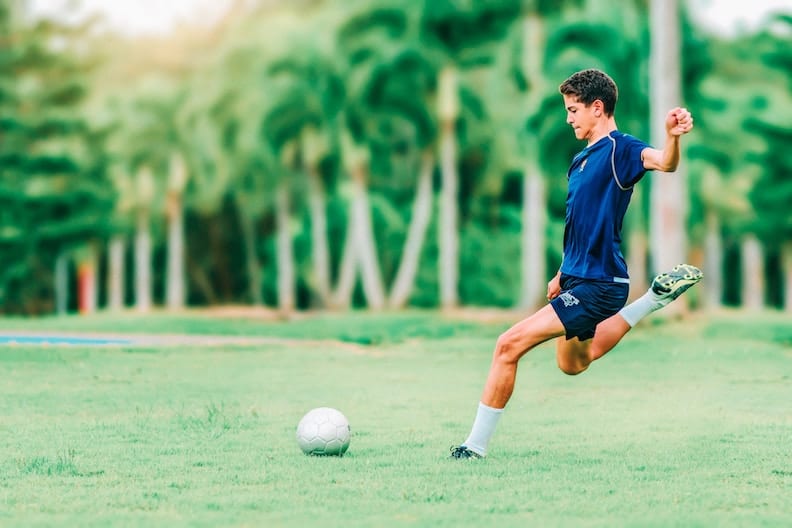 A recent study into the use of caffeine in sport found that three-quarters of people drink coffee or other caffeinated drinks before competing. For professional athletes, it is often an important part of their routine, providing an essential energy boost that can put them at the top of their game. It isn’t just about being able to run faster or jump higher though, but also about having the mental stimulation to be able to make quick decisions when you need to. But is it healthy to be drinking coffee before you play soccer? And how much coffee is too much?

What’s the right amount of caffeine to drink before playing soccer?

In the study, a group of athletes were given a drink with 3mg of caffeine per kg of body weight. So if they weighed as much as the average man – 62kg – then they were given a drink with 186mg of caffeine. This is the same as two 8 oz cups of brewed coffee The drink contained no sugar, and the athletes generally didn’t consume much caffeine as part of their daily intake. There was also a control group of athletes that did not have any caffeine. The group that consumed the caffeinated drink had a greater mean peak running speed, and could jump higher. If you are playing soccer and are looking to header the ball during the match, this is important. The group could also cover a greater distance, running for longer than the control group. This is essential if you are playing soccer for 90 minutes.

What kind of caffeine should you drink before a soccer game?

Caffeine was a banned substance in soccer between 1984 and 2004 due to the added advantages that it brings to gameplay. However, now you can use a little caffeine to help you have a physical and mental advantage. Drinking coffee before a soccer game can be a big boost, but you certainly don’t want to have too much liquid swilling around in your stomach before a game. You would be best opting for some good quality brewed coffee before a match. Instant freeze-dried coffee only has around 50mg of caffeine per cup, but a cup of freshly ground espresso has around 95mg. If you choose a Fair Trade variety, then you will ensure that the coffee growers get a decent living wage for the beans. The workers get better wages and are provided with better working conditions, and the quality of the beans is often better too – it may, therefore, be an even bigger boost to performance.

What is too much caffeine to drink before playing soccer?

Whilst you want to boost your performance in a soccer game, it is important to make sure that you don’t have too much caffeine in your system. Stay away from high-sugar energy drinks too, as these can lead to a short-term burst of energy, but then a slump. Ultimately they will make you feel more lethargic. If you have too much caffeine, you will get the sensation known as the jitters – heart palpitations and a feeling of anxiety. It can also cause irritability and diarrhea – something you definitely don’t want on the pitch. 400mg can be enough for you to get some unwanted side effects.

Drinking a couple of cups of coffee before playing soccer can really help your performance. You will be able to run faster and further and jump higher – a definite advantage.