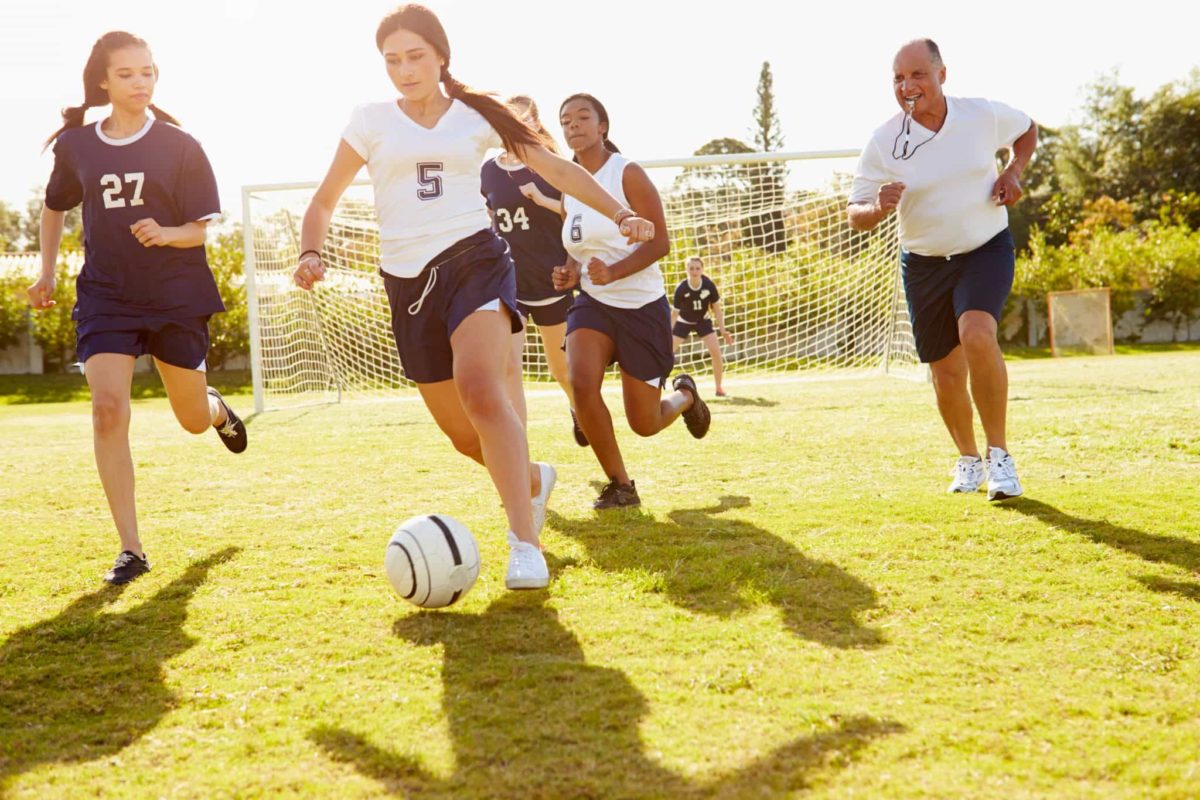 Beating players opens up the field. It creates new opportunities because opposing players must leave their mark to put pressure on the ball.

You become an asset to your team when you beat opposing players consistently. You become deadly because you can create constant opportunities.

10 Tips for Beating a player

Players are almost never taught to use their hips but the best dribblers do it naturally.

I’ve seen great players use their hips exclusively to make a defender lose balance. They didn’t even need to move the ball or their body.

I was stunned at how much my ability to beat a players improved when I started using my hips. Trust me, learning how to use them is worthwhile.

To practice using your hips, move them back and forth naturally in front of a mirror.

Once you get the hang of it, practice moving them in the same direction that you touch the ball. For example, move your hips right when you use an outside touch to move the ball right.

Once you master the movement, start using your hips to fake out players. Use your hips when you pretend to move in one direction. For instance, move your hips right when you do a step-over with your right foot.

Are your moves ineffective?

If so, you are using partial motions. In other words, you’re not putting emphasis on your soccer moves.

You do a step-over but you only move your leg. You don’t move your hips, body, or arms. When you do this, defenders can tell you are doing a move so they don’t fall for it.

Take a powerful first step after you touch the ball past the defender.

Your first step is key to beating a defender and preventing him from catching up.

Set up a cone. Do a move (optional) then push the ball past the cone like it’s a real player. Focus on developing a quick, powerful first step immediately after you touch the ball.

Developing your acceleration and agility will also help you develop a good first step.

Your arms help you stay balanced and increase acceleration and speed. Improving all of these attributes increase your ability to beat players.

Use your arms when dribbling and doing moves.

After you beat a player use your arm to push away their arms and body. You will delay the defender by preventing him from grabbing you or hitting you with his body.

Read our article, How to Use Your Arms in Soccer, for more information.

5. Dribble in front of him

Cut in front of a player after you beat him.

This significantly delays the defender because he will have to go around you to get to make a tackle.

I was lucky enough to learn this tip when I was young, and it helped me tremendously. It gives you more time after you beat a player and makes it harder for a defender to foul you (most defenders won’t foul from behind as it often leads to a red card).

Focus on dribbling in front of every defender you beat. It will quickly become a valuable habit.

If you have good ball control and use full motions (see step 2) you often don’t need moves to beat defenders.

Cutting back and forth with speed will make defenders lose balance.

This technique only works when you can keep the ball close to you. Otherwise, the defender will poke the ball away when you cut.

Use inside and outside touches to cut back and forth quickly then push the ball past the defender when he loses balance.

7. Prepare for the tackle

Look up at the defender(s) as much as possible when dribbling.

When he tries to tackle, cut the ball away (using a full motion) then quickly move forward and past him.

If a defender is delaying (moving backwards, usually at an angle) force him to make a tackle. Dribble forward quickly while keeping the ball close. Use moves to make him lose balance.

Eventually he will try to tackle you or lose balance (allowing you to push the ball forward and get past him).

Take on the defender as fast as possible. Don’t let him delay you significantly or another opposing defender will come tackle you. Pass if he is delaying you and you can’t beat him.

8. Pretend to kick the ball

Pretend like you are going to pass, shoot, or cross the ball than touch the ball across your body using an inside touch.

Make your kick as realistic as possible. Use your arms and bring your leg back. Look at your fake target.

Eye movement isn’t talked about often, but I’ve known many great players who use it to beat defenders.

Look where you are pretending to go. For instance, if you do a step-over to the left look at the space to the left of the defender.

Some defenders glance at your eyes to learn where you will take the ball. Use your eyes to confuse them, not help them.

Why are you trying to beat your defender?

To head to open space.

When you see open space, dribble into it. You will beat the defender effortlessly.

For instance, when I played winger it was easy to beat the opposing winger by touching the ball into open space in the middle of the field. It was much harder to beat him down the sidelines because there was less space.

Use open space to you advantage. It will help you beat players in soccer.

1 thought on “How to Beat a Player in Soccer”